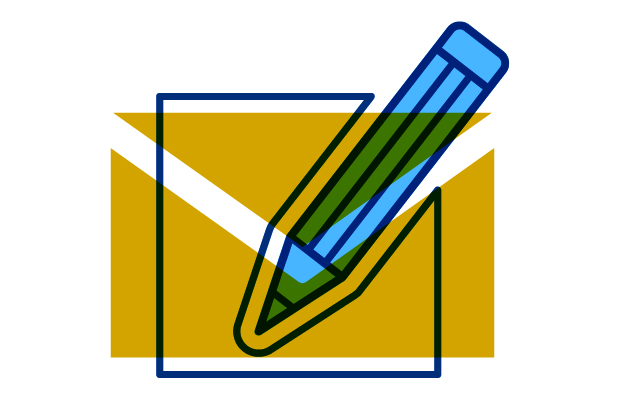 In an age where technology is rampant, it’s hard to decipher where your company’s energy and resources are best spent. Facebook’s algorithm makes marketing extremely difficult, a tweet’s lifespan is about 18 minutes, and the Internet is a sea of content and blogs. How do you ensure that the time you’re investing results in more than a few retweets and likes?

Here at Proof, we’re revisiting some of our marketing strategies as we prepare for 2015, and what we’ve found time and time again is this: email isn’t dead.

Okay, so we aren’t living in the “You’ve Got Mail” era, but studies show that we are still reliant on email channels for dependable and consistent communication. Today, we are no longer constrained to the desktops Tom Hanks and Meg Ryan so eagerly sat beside. Email is synced with our phones and tablets, making it quick and easy to access. In fact, 52% of the U.S. population accesses email from smartphones. And with consumers checking their phones an average of 34 times per day, the value of email marketing increases.

“The nice thing about email is that it doesn’t go away. It sits in your inbox and you have to do something with it.”

Email requires an action on behalf of the recipient, even if it is just to hit the “delete” button. This results in greater opportunity for engagement with your audience.

In March 2014, online business news distributor, Quartz, conducted a survey of global executives’ consumption of news and media. What they found:

“The inbox is the executive’s news homepage.”

In its study, Quartz states: “60% of executives read an email newsletter as one of their first three news sources they check daily—more than twice as high as news apps.”

Why is this? New York Times journalist, David Carr, explains,

I polled the office and asked which newsletters they are sure not to miss each week. Here are a few of the results: 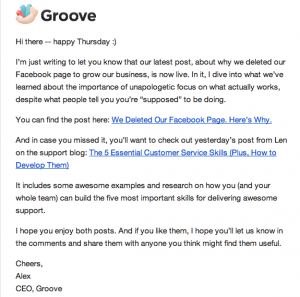 At Proof, it only takes about 10 – 15 minutes after Groove’s email arrives in our inboxes before someone says, “Hey, have you read this yet?” Their newsletters are simple, consistent, and personal. Most importantly, they have a simple call to action: read our blog.

Bonus: we love that they’re sent from the CEO’s personal email address–it’s a small touch that compels us to open. 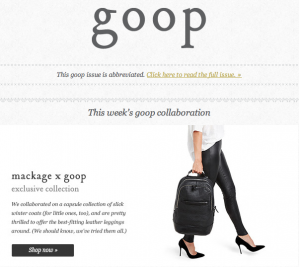 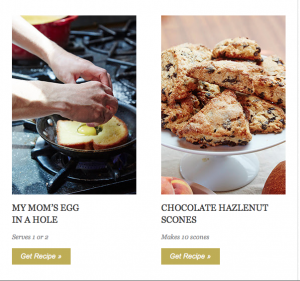 If you haven’t seen the Goop newsletter, you’d be amazed by how much content they include – everything from retail fashion to recipes to weekend getaways and recent news. The content is organized clearly on a simple white backdrop, with bold headlines, and visually compelling photography. Goop isn’t trying to be fancy. They’re allowing their content and visuals to stand alone, with clear calls to action (e.g. “Get the recipe”, “Shop Now”, etc.).

A quick glance at the Quartz newsletter and you’ll notice there is nothing particularly special about it. It’s simply one headline after another–but it’s clean, readable, and linear. You may be wondering if this layout is effective–Quartz has reported a 40-50% open rate, which is unmatched by many. They’re convinced that by providing quality content on a consistent basis, they fuel habit-forming behaviors: their readers expect Quartz emails and are eager to read them.

Quartz sorts through the clutter and presents the “must see” articles of the day to its readers. They streamline the news process to offer them something invaluable: time.

What This Means for Your Company

Quite simply, you should be engaged in some form of email marketing. Not only do emails allow your brand to share content within a medium that requires reader action, they are an opportunity for personal engagement. Your tweets may be missed, your Facebook posts never seen, but email presents the chance to connect in a more personal forum with your audience.

“Publishers seeking to stick out of the clutter have found both traction and a kind of intimacy in consumers’ inboxes.” –David Carr

Don’t know where to start? Take notes from the Groove, Goop and Quartz examples, which contain elements directly linked to their popularity:

While technology has changed significantly since the domination of AOL, email, or “the cockroach of the internet” has held tight to its grip on the market. In fact, a recent New York Times article shared that Mailchimp sends approximately 400 million emails each day. 400 Million Per Day.

So go ahead, open up your outlook or your iMail and craft a message, because as data shows, email isn’t dead.

P.S. We’re sending weekly newsletters, too. Sign up below!

Share:
Previous Article How To Simplify Your Copy and Inspire Action
Read More
Next ArticleFighting Through Perfect in Pursuit of Getting Shit Done
Read More