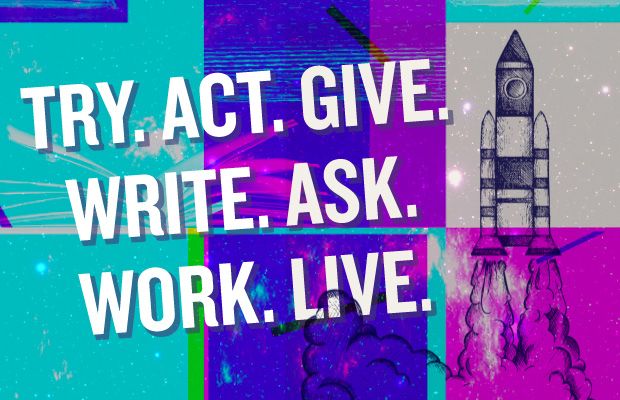 “There’s never been a better opportunity to step up and make an impact, while we’ve got the chance. This generation, this decade, right now, there are more opportunities to connect and do art than ever before. Maybe even today. It’s pretty easy to decide to roll with the punches, to look at the enormity of natural disaster and choose to hunker down and do less. It’s more important than ever, I think, to persist and make a dent in the universe instead.”

Seth Godin wrote these words a few days after Hurricane Sandy hit the Jersey Shore. It was the deadliest and most destructive hurricane of the 2012 Atlantic hurricane season that undoubtedly and dramatically changed the lives of many.

If you’re like me, there have been times when you’ve done nothing because you think it’s not enough.

Why give twenty dollars to a cause that needs twenty-million? Why write a book if everyone in the world isn’t going to read it? Why start a company if it’s not going to be the next billion dollar enterprise?

In the pursuit of “doing something great”, what if your contribution isn’t “REALLY great”?

I’m working on writing a book, and the hardest part, like many things, has simply been in taking the first step and writing the first few words. After plenty of second-guessing and self-doubt, I finally got tired of looking at the blinking cursor on my screen and started writing. It wasn’t perfect. It sure as hell wasn’t very pretty. But it was something.

And that’s what we do. We do something. We keep putting together our “somethings” until they stick. Until they start to feel right. Until dreams become realities. Until fantasies become historical inevitabilities.

Astronomers have measured the universe to be (at least) 28 billion light-years in diameter. I don’t even know exactly what that means, but I know there’s an almost infinite opportunity to leave your dent in something that’s measured in light-years.

A lasting legacy is made up of little moments. The twenty dollars you DID give to the twenty-million dollar cause. The book you DID write that resonated with someone. Try. Act. Give. Write. Ask. Work. Live.

Whether you like it or not, you’re making a dent in the universe.

Make it a good one.