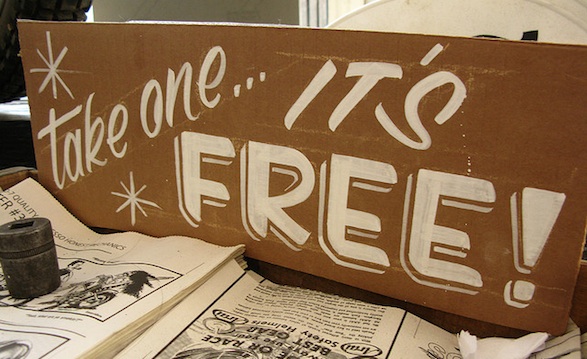 Twelve years ago, if you got something for free on the Internet, you probably got it illegally and it probably came from Napster. Today, the landscape looks totally different. Hundreds of thousands of things – from books to music to games – are available for free online – and completely legally.

If you’re like me, you’ve probably collected quite a few of these things. I have some great magazine editions, a couple of Seth Godin books, a slew of manifestos and ebooks, and more than a few songs – all of which were offered to me at no cost. On purpose.

This phenomenon isn’t new to you, because I’m sure you have that stuff, too. But what might be new to you is the question of whether or not you should join the club and give something away like everyone else. The decision to make something free that you could reasonably charge people for is tough, especially for a freelancer or entrepreneur when every dollar counts. But there are some definite benefits to making something great and then giving it away.

I had the pleasure of hearing Derek Webb speak this weekend. He shared about NoiseTrade, a website he founded which allows artists to “trade” their music for information about their fans. NoiseTrade was created after Derek successfully gave away more than 80,000 copies of his album Mockingbird in 2007 in exchange for the downloader’s email address and zip code.

With those email addresses, he could reach a much larger audience, and with their zip codes, he could plan tours and target fans in specific areas.

People will come out of the woodwork to get something for free. And they’re also willing to share some personal information for it (which is why NoiseTrade works). People who may just skim your blog or stop your website occasionally will usually be willing to tell you who they are if you’re willing to reward them for it.

And, if you ask nicely, those people will typically be willing to share your work with their networks, because as people, when we get something for free, we feel a natural tendency to return the favor. “Free” turns passive observers into active evangelists.

In Derek Webb’s words, “We knew we’d win in the long run if we didn’t nickel and dime people in the short run.” Sure, it’s possible he missed out on some profit, but most of those 80,000 people who downloaded Mockingbird probably wouldn’t have bought it anyway. They hadn’t heard of him before and wouldn’t want to risk $15 on an album they knew nothing about. But for free? Why not? And just like that, his reach grew and his name and message spread.

The thing is that when you give something away, there will still be people who are willing to buy it. And you’ll have the added bonus of reaching people you couldn’t have reached otherwise. Loyal fans are born everyday as a result of a well-executed online freebee.

Have you ever given something away? How did it go?