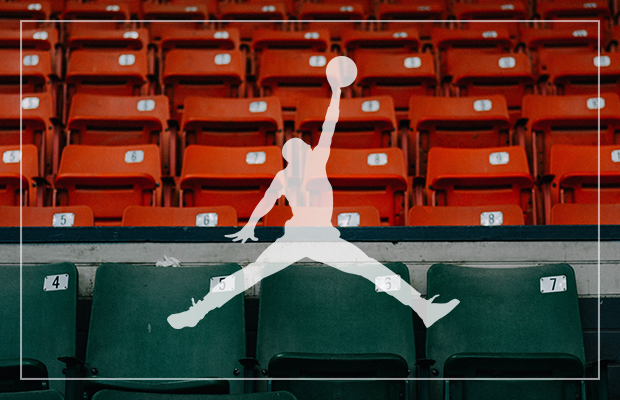 My whole life, Nike has been known by its iconic swoosh logo. We all know it, and many of us wear it often. Heck, some people even have it permanently inked on their bodies.

In the 1980s, Nike built one of the most seminal brand partnerships with Chicago Bulls’ Michael Jordan, and through that, the widely-recognized Jumpman logo was born. At the time and for years to follow, the iconic logo was mostly associated with the coveted Jordan-branded shoes and the rising popularity of professional basketball in general.

From Swoosh to Jumpman

Over the last few decades, the Jumpman logo has been printed on many pieces of Nike apparel and gear. What’s interesting though, is that in just a few short recent years, that logo crossed over to other sports. Derek Jeter of the New York Yankees led the charge in wearing Jumpman batting gloves and cleats. To see the silhouette of Michael Jordan prominently displayed on a baseball player was, at first, a bit odd.

Then the University of Michigan football program adopted the logo, and now you see it on nearly every piece of equipment they wear. This also seemed a little odd at first. But after thinking about it, the Jumpman not only branded a basketball player, it has now entirely replaced the Nike swoosh on uniforms in other sports.

At this point, I no longer see a basketball player. I see Nike. Its branding evolved right before our eyes!

More than a logo

Somewhere along the way, the Jumpman logo began to symbolize more than just basketball, especially to the generation that grew up idolizing Michael Jordan (still the greatest of all time). His image in the Jumpman became a symbol of athleticism, sportsmanship and competitiveness. And that’s something all athletes — from football players to baseball players — can appreciate, and strive to emulate.

There’s a slim chance Nike predicted this shift, but they did have the foresight to listen to the pulse of the public. They allowed the Jumpman to become bigger than its original intention. And that’s the ultimate goal when it comes to logos — for them to gain a life of their own and serve as a symbol. Not all logos live up to the challenge, but with the right mix of creativity and luck, it does happen. The Jumpman proves it.